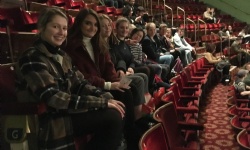 The Play’s the Thing

Only after sitting through Samuel West’s Hamlet as a sixth former did I finally ‘get it’: what tragedy is really all about. Not the number of syllables in a line or who’s soliloquising when, or where, or exactly why there’s another possible moment of anagnorisis. All of this scrupulous deciphering of the text becomes seemingly irrelevant once you’re sat in the auditorium and experiencing first hand, the almost tangible and incredibly harrowing emotions of all the characters on stage. For our sixth formers, there was a real buzz in the air as we made our way to the West End on the eve of the election: our fears undoubtedly amplified by all the noise reverberating up and down the country. But for Miller’s tragedy of the common man, ‘Death of A Salesman’, we were not to be transported to the lofty heights of chivalric castles; there was nothing ‘rotten in the state of Denmark’ this evening, no smiling villains tonight (at least not on this stage). Instead we found ourselves claustrophobically squashed into the Grand Circle of the Piccadilly Theatre, checking out the repair work on the ceiling (the cast quite literally brought the house down on the opening night). Plastering sorted - the show must go on! As the curtain rose, I was reminded again of my own 6th form trip to see Samuel West’s Hamlet: minimalist, grey, angular...surely not another Orwellian reinterpretation of an A Level set text tragedy? The boundaries of the Loman brother’s bedroom marked out with what looked like concrete slabs, uncannily similar to the battlements of Elsinore that jutted out from the stage floor of the Barbican at the turn of the century; I found myself wistfully consuming yet another brutally stark set design reflecting the political unrest of the times. So, not too many decades later, looking down on the Loman’s family home without walls, (a dream rising out of reality), I knew my students were sure to experience that very same purging of emotions as we sat up in the gods, faced with the imposing ‘towering, angular shapes’ of Brooklyn apartment buildings, trapped for three gruelling hours of brilliant drama.

We all shared a truly tragic experience: we shared the Loman family’s fears for every unstoppable minute of Wendell Pierce’s phenomenal interpretation of Willy’s inevitable demise. By Act 2 the sobbing in the auditorium was so audible, that the ‘it’ we were all trying to ‘get’ resounded contagiously over the flute playing, swapped with a saxophone for this 21st century interpretation otherwise solidly grounded in the text. Much like your exam essays will be now that you know the play so well :-) you’ve got this!