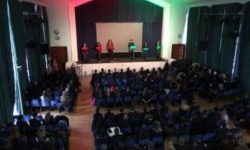 A passionate and well argued debate

Earlier this year, we gave our students a poll: Which of these issues do you feel most passionate about? From the options listed, including granting 16 year olds the right to vote, there was an undeniable winner. Students were concerned about knife crime.

In February, a small group of students and sixth formers travelled to the Forest Ground, where they were soon engaging in an interactive knife crime workshop. Emotive talks by two mothers directly affected by knife crime — one who had even faced the true, unimaginable reality of losing a son — allowed the pupils to see the true impact of the epidemic, which is often less fathomable when only narrated by impersonal statistics. The talks were followed by speeches by local police officers, focusing on the crime and law side of the story. Shortly after, a live dramatic performance was given, creatively telling the story of a fictional young man whose fatality was in part dictated by an initial decision to carry a knife. It was clear, however, that this story has become a reality for many.

Following this, 20 students from years 7 to 11 prepared for debate week starting 11th March. Led by Katrina Dewale and Grace Evans (both sixth form members), the students performed intricate discourses to their respective year groups in each year’s assembly, arguing either for or against the question: “A tougher approach is needed to stop the surge in knife crime.” Pupils arguing for the statement attempted to convince other students that an increase in prison sentence severity, stop and search, and overall policing is necessary to combat the problem, whilst those arguing against instead hoped to turn the audience to social reform such as increasing youth club funding, and interventions into the social environments of those exposed to violence. Students were encouraged to form their own opinions, and on the Friday, had the opportunity to cast their vote for or against the statement. Interestingly the result was overwhelmingly in favour of the statement, with 453 students voting to see a tougher approach and 174 against the idea. Nevertheless, one thing was common to all students: by the end of the week, pupils should have felt more informed about the issue that they had expressed concern in.