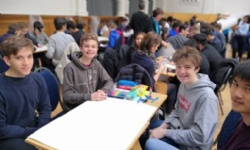 The day started at 6am (a time none of us believed existed) and by 7 we were on our way to the Big Smoke. Despite the fact that we were deprived of sleep and still awaiting our breakfast, it appeared that a game of Irish snap would be on the cards (pun intended). To spice things up and get our brains in the mood, we augmented the game with math related rules, covering topics from co-primes through to the parity of different cards.

Whilst this game was certainly good for our minds, our writing hands took a beating (along with my self-esteem), so we decided to give it a rest and work more on the poster. This consisted of not only conducting extensive research about the relationship between platonic hydrocarbons and symmetry operations, but also writing some preparatory material relating to the definition of Eulerian and semi-Eulerian circuits. After about an hour of work, we finally arrived at the station and were rewarded with breakfast, which was absolutely scrumptious (despite the lack of hot chocolate). It was now time to head to the Royal Horticultural Society Hall, which was the venue for the day’s event. Already smitten by London’s charm, the venue reaffirmed our adoration for the architecture of the city. And finally, we had arrived.

Registration and the settling of nerves didn’t take long, and before we knew it an A1 piece of poster paper was staring back at us with a crowd of felt tips and highlighters spectating. Waiting. Mocking. After a small introduction from the judges, we were off. This round was the Poster Round, which meant that we had to create a poster on a given topic which this year was Structure and Symmetry in Chemistry. We were allowed to prepare a small amount of material and we decided to create a model of the molecule coronene, as it could not only be easily described as a graph, but it also boasts high rotational symmetry, which we believed would make it very appropriate for the given topic.

To create this model, we constructed hexagons which were used to represent our benzene rings and included most of our information inside these. We also added small circles, which were the 24 carbon and 12 hydrogen atoms of the molecule. Along with the information we had come prepared with, we were also handed 3 questions which we must solve and our answers had to be evidenced somewhere on the poster. With Ethan as Lead Creative Director, Sam as Chief Hexagon Constructor, Filip as Head Symmetry Operator and me, we began to divide and conquer the plethora of tasks we had 50 minutes to complete. During these 50 minutes, glue became as sought after as gold and the air felt as frantic as the Underground. After what felt like a couple of seconds, it was over. The judges collected the posters and we were left to recover.

We weren’t allowed too much time, though, and the group round was quickly upon us. This round had 10 questions shared between the four of us and we could discuss to solve them or work alone, choosing to share the questions in any way we liked. This round felt a lot harder than the practice rounds we had done in the past and certainly much tougher than the regional contest, but we shared ideas and discussed many of the problems. Most questions are worth a blanket six marks, but a few are comprised of two 3-mark questions and in the end we bagged 48 marks out a possible 60, a result we were certainly content with considering the perceived difficulty of the round.

We were now allowed lunch and we made the most of it by all eating a heinous volume of triangular sandwiches and bags of crisps from a seemingly bottomless buffet at the front of the halls. During our lunch break we also noticed that all of the posters were hung up for public observation and we took this as an opportunity to size up the competition. We saw some spectacular posters with a few transcending the idea of poster itself and having actual models of platonic solids placed on their posters, some even being coated in information. All in all, the lunch was filling, the posters were all intriguing and vastly different, and we were fully prepared for the next three rounds of competitive mathematics.

Next up was the Crossnumber, a round that shares more similarities than just a name with the better-known Crossword. This round had a grid very similar to a crossword that instead was filled with numbers instead of letters. Just like a crossword, there were also clues and the only difference is that we were in pairs, with one pair solving the down clues and the other pair solving the across clues. This has always been our strongest round and we certainly didn’t disappoint on the big day, securing 63 out of a possible 66 points – only losing three due to small errors induced by time pressure. One peculiarity about this round that differentiated it from previous Crossnumbers was the way that we had to infer what the other pair’s answer was in order to progress through the puzzle. Overall, this round was really enjoyable and we were happy with the end result.

The next round was the Shuttle and this round has always been the most stressful, as one mistake can snowball into a series of compounding losses. Like the Crossnumber, this round is played in pairs and the risk comes in because the answer one pair calculates forms part of the question the other pair must solve. This back and forth happens for four questions (two per pair) for four rounds, and there is also a bonus three points per round if all questions are solved within a certain time. The round was alright and we finished three of the four rounds perfectly, but made one slip up on round 2 and therefore got 57 out of 60 marks, which was a brilliant result considering how quickly the pace of things can change.

The final round of the day was the Relay round, a round that can only be summarised by the precursory “please refrain from running throughout the course of this round” threat we all received at the beginning of it. This part of the competition had each pair split up, with one half on one side of the room and the other flung across to the other side. The passing and marking of questions and answers, therefore, required a lot of movement and rapid foot-shuffling across the halls – weaving between tables and barging through the competition. We had a set time limit to answer as many questions as possible and we answered 12 altogether, a number we couldn’t complain about at all. The next instruction was to then return to our original tables and quietly await the final delivery from the competition organisers before the final results were unleashed. 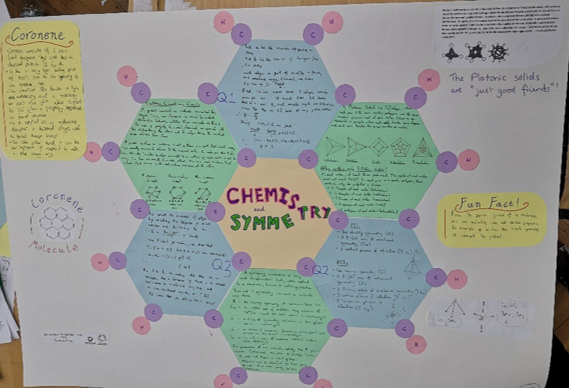 The introduction to the final awards ceremony featured congratulations on the overall quality of posters, a little speech about maths, as well as a mathematical rap, from Bobby Seagull. This was all quite surprising, but fun to watch nonetheless. Finally, it was upon us - the awards were about to be distributed. There were six up for grabs: three for the best poster and three for the best school.

The first to be announced was the best poster competition. The room went silent and third place was announced. A round of applause later and it was second place’s time to shine. “And in second place…”, the speaker boomed, “The West Bridgford School”. 90% shocked and 20% in total disbelief, we marched up to the stage, absolutely certain there had been some sort of mistake somewhere along the way. This turned out not to be the case and we all collected a certificate and a Megaminx (a rubik’s cube-eque puzzle in the shape of a dodecahedron), before being whisked off for a photo. After the photo it was time to stand and wait for the other awards to be announced. We also received a small card with our overall final position on and learnt that we came 11th overall. This is the highest position our school has ever achieved, so we saw this as a massive victory and a greater goal for future years. Finally, and as if nothing had happened at all, the competition was over and it time to begin our commute home. 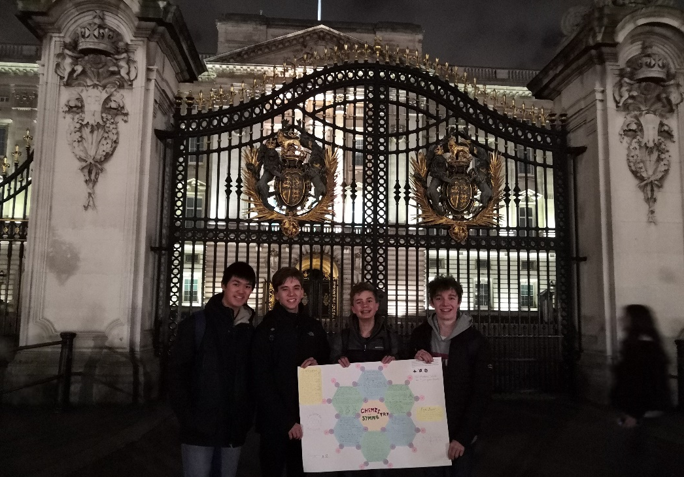 Dinner took the form of the second buffet of the day and we all filled our boots with as much pizza and coleslaw as physically possible. The food tasted great, but the victory tasted much better and we all spoke about our unanimous love for the day and the opportunity we were granted. The evening rest didn’t go down without any celebration, though, as we took our poster to take a picture with the queen, holding it in the cold in front of the gates of Buckingham Palace as it impatiently waited for the photo to be taken. We also took a stroll through one of London’s many parks and had a view of the London Eye shining bright purple in the dark. This stroll, though, was unfortunately cut short as we had to make it to our train as the idea of walking back to Nottingham didn’t appeal to any of us. After another fight with the ticket machines and a lot more pushing through commuters, we made it onto the train and were on our merry way home.

Still not satisfied with our consumption of Irish Snap for the day, we held another competition and again added in some of our own rules. Eventually, our heads hurt too much from a day of hand snapping and number crunching so we put the cards down and rested our way home. All in all, it was a memorable day and a brilliant opportunity we were all grateful for.