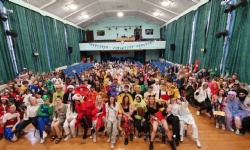 The beginning of the end, as Year 13 bid farewell to school life

Following last year’s meteorological debacle, Sixth Form staff spent much nervous energy closely examining all sorts of weather apps (“The BBC Weather app is saying…..”…”Ah but the forecast’s not so good on my Apple Weather…”) and, thankfully, Bouncy Castle-Gate was avoided.  The field was open, the ice cream van was here and the day could go ahead as planned.  Hurrah!  However, as is always the case on these days, there is always a little more reflection and melancholy than students expect.  It is the combination of these things that make this such an important day for our students, as it marks one of the last times that they will all be together as a community.  The students, as usual, showcased all the virtues that they have brought to the school over the past few years and emphasised how greatly they will be missed by the school community as a whole.

Particularly noteworthy this year, as usual, were the plethora of great costumes that students had hired or (if they were feeling more adventurous) made themselves. Whilst it’s unfair to pick individuals out, Oli Latham’s Transformer outfit (a Transformer when he was standing up, an articulated lorry when he laid down) was one of the very best I have seen in my five years at the school!  Much ice cream was consumed and much bouncing was done on the castle before students attended Mr Bowie’s Leavers’ Assembly.  This year group have done things their own way and have shown the school a tremendous amount of verve and enthusiasm for their academia and their lives. Thank you – we will miss you.